Higher education in Ukraine is aimed at providing general cultural, practical and scientific training, the formation of the intellectual potential of the nation and the comprehensive development of the individual as the highest value of society. It should become a powerful factor in the development of the spiritual culture of the Ukrainian people, a means of reproducing our state. At the request of modern society, a person of a new formation must be comprehensively developed with a fundamentally new worldview, which in turn is the key to the success of future development of Ukraine.

The training of a modern medical specialist and pharmacist is the education of a conscious Ukrainian who must know the traditions of his people, its history, have modern information and medical technologies, several foreign languages, be an example of high culture and intelligence.

Today we are witnessing negative processes taking place around the world. It depends on people, usually educated, but, unfortunately, without strong moral principles. It is university education, and, above all, its humanitarian component, is designed to be the leader of the younger generation of physicians in the world of spiritual origins.

Organizations, like people, have their own prehistory, are born and live in different guises, experience crises, recover. But events and people unite, move and direct them. This story is about them.

The Department of Humanities was founded in 1957. From 1957 to 1970 it was called the "Department of Marxism-Leninism." Candidate of Historical Sciences, Associate Professor GG Tkachenko was appointed Head of the Department.

Teachers conducted active research work, published articles in international and national collections of scientific papers and materials of scientific and practical conferences on philosophy, economics, history. At that time, the teachers published 207 scientific articles and abstracts.

Then the department taught such disciplines as philosophy, national history, economic theory, political science, sociology, world religions, ethics, law and management in dentistry. In order to improve the educational process, teachers of the department prepared manuals, recommendations on social sciences and humanities. Lectures and practical classes were taught in Russian and English. Scientific work was carried out with undergraduates, graduate students and applicants.

Unfortunately, the socio-political situation in eastern Ukraine and the fighting in 2014 forced the university to leave Luhansk and start a new life in the city of Rubizhne, Luhansk region.

It was here in 2015 that the department was completely restored. It was named the Department of Humanities. Candidate of Philosophical Sciences, Associate Professor Inna Olehivna Kuzmichenko was appointed Head of the Department. 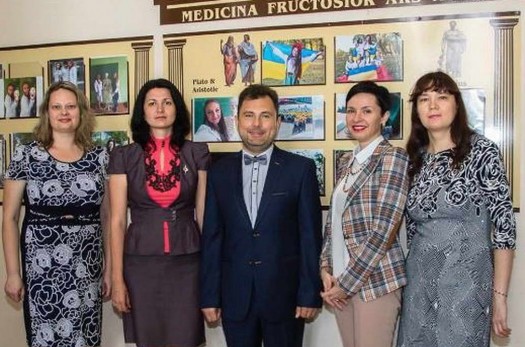 The composition of the department in 2016:
From left to right: Aseeva OA, Ruda VV, Zhurba MA, Kuzmichenko IO, Oberemkova YE

The staff of the department carries out humanitarian training of future doctors and pharmacists at a high enough professional level. It should be noted that the average age of teachers is 37 years.

However, despite the rather short existence, the department sets itself serious tasks for further development and improvement, bringing in line with modern requirements and time requirements of all types of work performed by it. Our team looks to the future with confidence, has many creative ideas and an inspired desire to implement them.

Disciplines taught at the department are designed to promote the spiritual enrichment and growth of the student's personality, the formation and improvement of professional and ideological culture of the future doctor. It should be noted that the teachers of the department provided full methodological support for all disciplines.

For the staff of the department the main goal of the activity was and remains the education of a comprehensively developed perfect personality, because the university is not only a high-class specialist, but also the education of a person with a worldview. And the staff of the department perfectly understands its high responsibility for the results of this case. After all, the future of the state depends on the knowledge and moral qualities of a specialist.

We consider the graduate of Luhansk State Medical University, first of all, as a holistic personality with its spirituality, universality, creativity. This is a man with a humanistic view of the world, which combines intelligence with morality, theoretical knowledge and practice, the ability to think logically with the ability to empathize.