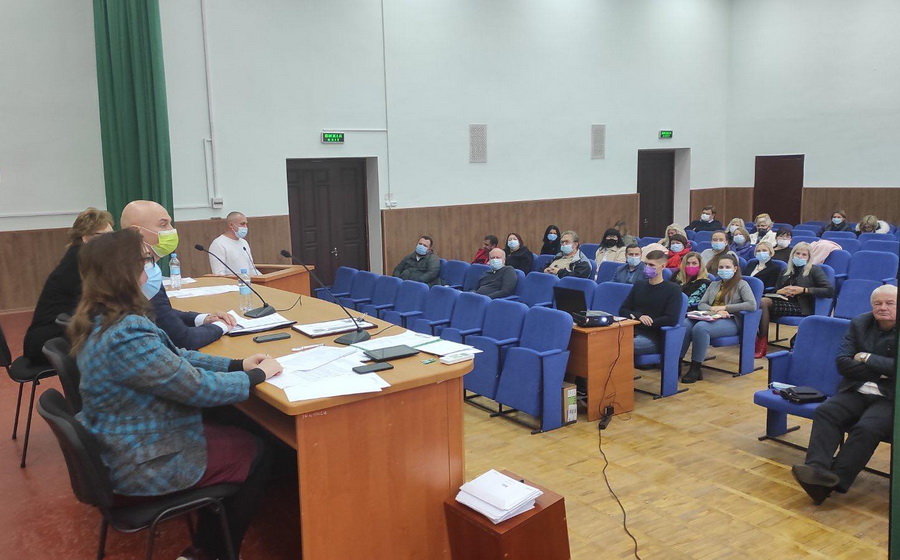 On October 11, 2021, a regular meeting of the Academic Council of the University was held with the participation of teaching staff and heads of offices. In accordance with the agenda, a number of important issues of the university and its structural units were considered.

The meeting was opened by the Rector of the University, Professor Serhii Smirnov. He noted that the staff of the State Institution “Luhansk State Medical University” was thanked by the Ministry of Reintegration of the Temporarily Occupied Territories of Ukraine for a significant personal contribution to the implementation of state policy on reintegration of youth from the temporarily occupied territories of Ukraine.

Vice-Rector for Research, Professor Iryna Komarevtseva approved the draft application for funding for research, which is funded by the state budget (on scientific journals, approval of research topics of graduate students).

The Secretary of the Academic Council, Associate Professor Oksana Kruhlova introduced the new members of the Council, namely among undergraduates for higher education. Competitive cases were also considered; proposals of undergraduates for higher education for participation in the competition for the scholarship of the President of Ukraine for the 2nd semester of 2021-2022 academic year.

Dean of the Medical Faculty, Associate Professor Inna Kuzmichenko and Deputy Dean of the Pharmaceutical Faculty Valeriia Yefremova spoke at the meeting with reports on the status of educational work in the faculties following the results of the 2020-2021 academic year and tasks for the 2021-2022 academic year. Maryna Soloviova, responsible for organizing and conducting integrated licensing exams, spoke about the analysis of passing the licensing exams “Step 1”, “Step 2” and “Step 3”at the University. Executive Secretary of the Admissions Committee Olexandr Yanchevskyi spoke about the results of the recruitment of applicants for the first year in 2021.

Afterwards, the members of the Academic Council considered the issue of merging the departments, and a number of issues and information materials.

You can see more photos from the event here: Google Photo